Sleepless nights are almost like a rite of passage for new parents. Braving through the struggles and heavy eyelids is always worth it when you finally see your child go to sleep. Then they wake up wailing, and it all begins again.

Despite how it might seem now, sleep in infants can be managed, and armed with these useful tips, you’ll be prepared to take on anything your sleep-rebelling child might throw your way.

Babies and adults have different sleep cycles and spend much less time in the Rapid Eye Movement (REM) sleep phase. Their sleep cycles also tend to be shorter in general.

Their sleep patterns can vary; however, they mostly sleep in short spurts during their early months. As they grow up, they will need less total sleeping hours, but each time they do hit the sack, it will be for more extended stretches!

Sleep is crucial because it allows us to store the fascinating occurrences for the day! For us older folk, we need less REM sleep because we have established routines we’ve come to expect, and we don’t see something new on the turn of every corner.

We’ve come to expect the colour of the car to be red, or the dog to snuggle up with us. But for the fresh, curious eyes of a newborn, it’s an assault on the senses with all these new feelings and things they see for the first time!

Children’s brains are quickly overwhelmed with all these new experiences, so it’s no surprise they need to nap so often. It’s to process all those exciting things they’ve learned.

An average newborn can sleep for up to 16 hours or more in a day, often spread out in stretches of a few hours at a time, usually no more than 1 – 2 hours. At first, it might seem unpredictable and all over the place, but give your child time and soon, a more consistent sleep pattern will emerge that you can count on.

For most babies, they don’t start to sleep through the night until at least three months of age.

You can tell the signs that they are sleepy when they rub their eyes, yawn, look away or start fussing. Sporadic, jerky arm and leg movements are also telltale signs they might need to take a well-deserved nap.

So, how do you gently nudge them into a comfy sleep session? The first thing you should try to do is to avoid overstimulation, especially before nap time. Keep things on the low, maybe put on soft music and dim the lights as well. Be calm and collected as you cradle them, maybe hum a tune or read a book to them. Look to create a consistent bedtime routine your infant can come to expect, and one that you can re-enact whenever needed. You can start to create a routine with your infant as early as 6 – 8 weeks old.

When you tuck them in bed, make sure it’s when they are drowsy but not quite asleep. It lets your child associate falling asleep with being on the bed, and not when you are around. This enables them to form more independence in the future to fall asleep on their own. It lets them self-soothe without the need for you to be around 24/7!

Many parents adopt the “3 Bs” method to get them to sleep: Bath, Book, Bed.

Once they are all nice and ready to sleep, you want to clearly define when you leave the room at the end of the bedtime routine.

When you do set them down, it’s best to do so in a crib or bassinet. Avoid couches, bean bags and your bed.

Set them down on a snug but tightly fitting crib, and if they still have trouble sleeping, a pacifier can usually do the trick. Make sure they sleep with nothing in the crib to grab, just firm bedding and clothing. Anything both soft and hard they can grab, especially that early on, can be dangerous. Make sure when they sleep, do so face up and not with their belly facing down onto the bed.

You might have heard the term co-sleeping floating around and wondered if it’s worth its salt since some people find that it works for their child. If you are interested in trying it, make sure you make informed decisions on safe practices and weigh the risks and benefits!

But what if your child has a relapse? Children are known to appear to be sleeping regularly, only to pull a fast one and regress to late-night wakefulness and throwing fits again. This is seen most often from 6 months of age onwards.

Don’t fret! It’s an entirely healthy development, and much of it can be attributed to separation anxiety where they don’t understand when you leave them for the night, it’s only temporary.

At this period, they tend to sleep in 1 – 2 hour afternoon naps, and at night they can sleep for blocks of 6 – 10 hours at a time. Some babies still need feedings between 10 – 12 months, so keep that in mind!

It’s still essential for you to keep to your established bedtime routine, and try to avoid late afternoon naps as they can interfere with the long late-night chunks of sleep you can expect to look forward to!

At this age, “security” items are important, such as a familiar blanket to hold onto or a plushie to hug! This everyday, comforting item can be brought along even when they start going to childcare, but make sure you let the teachers know in advance! They can bring a bit of home with them, and feel just as comfy.

10 – 13 hours total, and most of them finally graduate to no longer needing naps!

At this age, try to steer clear of drinks with caffeine, too much screen time and especially none in the bedroom. 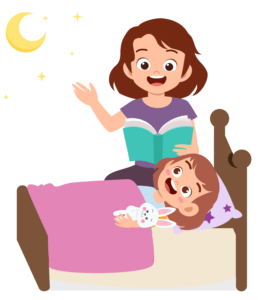 At this age, you might want to buckle down on reading those bedtime stories to them! It’s the best time to do so, and there have been many benefits associated with creating a literary interest early on in life. Now that they’re older, they can better understand the stories, and it helps build communication skills, stimulate creativity, improve attention span and a whole slew of other benefits! Here are a few more to boot.

Of course, each child is unique in their own way. So you should be willing to adjust your routines around your child’s tendency towards being a Night owl or Early bird if applicable. Schedule around the typical behaviour they exhibit, and you’ll find yourself with a very docile, well-rested baby more often than not!